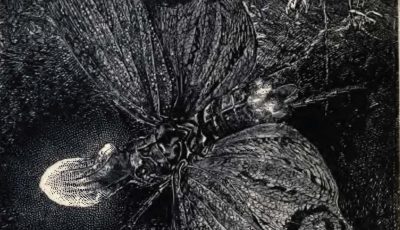 from Court Visionaries of the Imperial Age

Though hailed as a prodigy at age 12 after successfully winning the Academy Prize for the most fully-realized envisioning among children, Mona Fiori disappeared from view, only to reappear in the capitol at age 37.[1] In a series of group exhibitions, she rapidly became known for the envisioning of time and the envisioning of persons; her success led to several lucrative commissions, which soon attracted the attention of the Emperor Herself.[2] Mona Fiori’s first limning of the Emperor, Envisioning of Her Royal Highness in Her Study, was widely considered a masterpiece,[3] displaying a nuanced understanding of light and its properties and capturing an essence of luster rarely seen.

From that initial success, however, Mona Fiori’s subsequent imperial commissions show increasingly eccentric choices that deviated widely from accepted limnings of the Emperor’s light. Envisioning of Her Royal Highness in Hunting Costume, for instance, depicts the Emperor with a direct expression and visible shadows;[4] Envisioning of Her Royal Highness in Celebration of a Successful Harvest depicts the Emperor wearing the apron of a worker and uses an amateurish style that gives the whole of the composition an unusual texture, as if it were made of a mundane substance.[5] Such poor work was, of course, unbefitting the role of court visionary, and Mona Fiori was summarily dismissed. In a show of resentment, Mona Fiori exhibited Envisioning of Her Royal Highness as a Man. While the envisioning was clearly a return to her earlier display of prodigious talent, it presented the viewer with the shock of a virile man wearing the Emperor’s finest uniform.[6] For this obscenity, Mona Fiori was arrested and hanged. In the wake of her death, medical documents were uncovered that testified to a madness caused by her overweening ambition, which had also led her to refuse several lucrative offers of marriage during her brief career.[7]

[1] Though many biographers have claimed that during this time, Mona Fiori was a radical, a practitioner of atheism, an illegal prostitute, or a nun, what little evidence exists shows that Mona Fiori lived uneventfully at home during those years, and that her parents died just before her first group exhibition.

[2] Despite persistent scholarly claims, there is no actual proof that the envisioning that attracted the Emperor’s attention was of Mona Fiori herself, made in a brutish style that cunningly implied physicality. This envisioning has never been found, nor is there any record of it having existed, save perhaps in the minds of more salacious academics. In point of fact, inventories of the Emperor’s substantial collection are notable for the absence of erotic images. It has been verified that at a dinner party, when asked if the Emperor was above such dissolute commissions, Mona Fiori replied, “why would she want such a thing? You cannot f–k light,” which became a revolutionary slogan some decades later.

[3] This envisioning was not only notable for its technical mastery and its perfect depiction of the Emperor’s light, but also for being approximately three times the height of the Emperor Herself. Its presentation started a fashion for larger-than-life envisionings, with many noble families not only commissioning towering envisionings of their own luster, but also building additions to their houses to display them; those additions became known as “Fioris.” When Mona Fiori was dismissed, these envisionings were purged out of necessity. Many now use their “Fiori” as an altar or a closet.

[4] As befitting Her luster, the Emperor was most often limned gazing upwards, rather than at the shadows of the world. Contemporary scholars believed that this envisioning was Mona Fiori’s attempt to assert her place among the hierarchy of court visionaries by declaring that she had experienced an intimate moment with the Emperor. The explanation credited to Mona Fiori—“Her Highness is looking at Herself”—has never been substantiated.

[5] This envisioning is perhaps the most widely interpreted of Mona Fiori’s works; this may be the reason for its removal from public view soon after her execution. The interpretations have ranged from scholarly considerations to the outright fanciful, such as that the texture is not light but actual objects such as straw, fur, and moss; or, the texture is an attempt to limn necrotic flesh, which naturally possesses no light. Perhaps most disturbing was the anonymous declaration that the envisioning proved the Emperor was in fact of humble origins and utilized court visionaries to imply a luster She did not truly possess. What is incontrovertible is that the envisioning represents a decline in Mona Fiori’s abilities, in all likelihood brought about by her incipient madness, the scrutiny she endured after Envisioning …Hunting Costume, and the withdrawal of a particularly advantageous marriage proposal.

[6] For some time after its unveiling, the identity of the man was a source of public debate, sparking no less than two plays, five epic poems, and 19 popular ballads. Though the Emperor was of necessity above affairs, and certainly would never have pursued any intimacy with an uncastrated man, public opinion persisted in casting Her Highness, Mona Fiori, and the man in various romantic entanglements. In the end, however, the only certainty is that the envisioning was another product of Mona Fiori’s madness, as her statement of defense makes clear: “You speak to me of our luster, and I was trained from birth to limn that light, but the truth is, we are not light, but a distortion of light . . . What I have envisioned is the Emperor’s truth: I have envisioned Her shadow.”

[7] Though some have called into question the veracity of these documents, we need only recall Mona Fiori’s words at+ the gallows as further proof of her mentality: “I die today not because of what I envisioned, but because of what you saw.”

—L.S. Johnson was born in New York and now lives in Northern California, where she feeds her cats by writing book indexes. Her collection, Vacui Magia: Stories, won the 2nd Annual North Street Book Prize. Leviathan, the sequel to her gothic novella Harkworth Hall, will be published this summer.