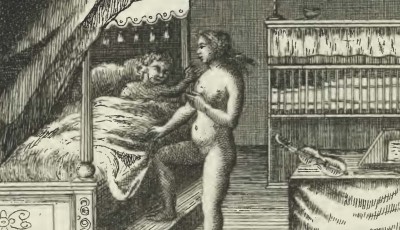 February 8, 2016
Author: Jennifer Todhunter
Category: Writing
Astrid has uneven breasts, a scythe-shaped mark underneath her left shoulder blade, and an invisible thread tethered to her heart. When it’s raining—which it does often, and without reprieve once autumn begins—she trudges barefoot out her front door and walks through the cool grass and across the pebbled road to a weathered bench overlooking the pond. There she sits, sometimes wearing nothing more than a knee-length button-down shirt, watching the drops fall, the frogs hop, and the grayness shift across the sky.On days like today, when Astrid’s thirty-one-year-old body doesn’t make her work harder for her breath or her steps or her life, she brings along a snifter of cognac and props the glass against her chest to inhale its sweetness and feel its warmth move through her skin. She closes her eyes and listens to the birds and the wind and the branches, and concentrates on being. Occasionally, the length of her invisible thread corkscrews around her failing frame and squeezes.She does not regret leaving her friends and her fig tree and her life in the city, because sadness and remorse have a way of twisting themselves into a poisonous tangle of guilt. But she does get lonely at times and wishes she could find the end of the twine.

So today, after Astrid ambles out to the pond with her walking stick in hand—the one covered with plaques from places she visited before she became bound by this house—she thinks about something other than the saccharine scent of honeysuckle and the rhythmic chant of frogs. Astrid remembers the way her fiancé, Theo, snored through the deepest part of night—not the look on his face when she drove away with her things still sitting on their porch. The giddy rush from joining the mile-high club together somewhere over the Mediterranean Sea—not the way Theo couldn’t touch her after her arrhythmia diagnosis for fear that she might break. The smell of salt and campfire on Theo’s skin after a weekend spent surfing up the coast—not the sound of his resolve shattering when she told him it felt like she was drowning. Astrid, after all, knew what it felt like to almost drown, having been saved by Theo when her sailboat capsized twelve miles off the coast of the Pacific.

It’s during this moment of reflection that the softness of her tether becomes taut, and—to her surprise—a series of dots and dashes thud through her heart.

Astrid straightens her shirt over her shoulders, and waits, wondering if death has finally come to take her away. She is ready, she thinks, and tries to feel the air and the rain and the world around her one last time. Then the tension in her chest dissolves and the wind starts in again, bringing a chorus of warbling bluebirds to their wings.

Later that night, Astrid tidies the refrigerator, organizes her books, and writes a note to Theo, telling him that thirty-four isn’t too old to find another meaningful form of love. Standing at the door, mesmerized by the downpour and thinking about the months they spent riding the rails from stem to stern of the western seaboard, her heart pulls fiercely. Grasping the doorframe, she lowers herself to the hardwood floorboards, and gasps.

Then, she feels the dots and dashes.

She anticipates death once again, her tethered heart throbbing in the damp autumn air, and hopes it will take her before winter arrives.

Letting sleep take her away instead, she clings to dreams of Theo.

Astrid wakes the next morning to the never ending sound of rain on her roof and a stiffness in her bones that she hasn’t felt before. She swathes her fatigued figure in blankets and sits in front of the bay window, unsure if she’ll make it to the pond today. For the first time, she wonders if she made the right decision moving out here to die all alone, if she should have stayed in the city and somehow found a way to absorb the pain she would inflict on those around her.

And a knock echoes through the empty house.

It takes Astrid some time to make her way to the entrance. She pulls the door open, and sees Theo standing on her stoop, his auburn hair matted to his head and his love thick on his face.

“How did you know?” Astrid asks, her vision blurring.

“You told me,” Theo says, reaching out and taking her hand in his. He thrums a series of dots and dashes against her chest.

—Jennifer is a number nerd by day, word fiddler at night. She enjoys dark, salty chocolate and running top speed in the other direction. Find her at www.foxbane.ca or @JenTod_.