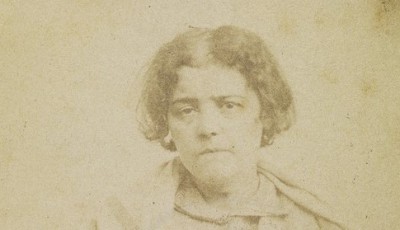 A note on our art for the month of August

Any followers of Zetetic already know that the “art” we use to accompany the stories and poems is never meant to represent the writing or the author.  Indeed, it was often not intended to even be seen as art.  This is the art with sources for the first five months, courtesy of The Public Domain Review, our favorite source for the unusual, the esoteric, and the occasionally ephemeral, rescued from oblivion.

April: Victorian Occultism and the Art of Synesthesia

May: Flemish Mask Designs in the Grotesque Style (1555)

I would like to discuss this month’s art and provide some context for why it was chosen.

From the Public Domain Review entry on these pictures: Photographic portraits taken by Dr. Hugh Welch Diamond of patients from Surrey County Asylum in England where he worked as a psychiatrist. Diamond was one of the very early practitioners of photography and certainly the first to systematically use it in the attempted treatment of mental illness. An advocate of the pseudo-science of physiognomy, in which the face was believed to be the mirror of the soul, Diamond proposed that through studying the faces of patients, physicians could identify and diagnose mental complaints. The faces of the patients were seen to represent ‘types’ of mental illness such as melancholia and delusional paranoia. As explained in an 1856 paper titled ‘On the Application of Photography to the Physiognomy and Mental Phenomena of Insanity’: “the Photographer catches in a moment the permanent cloud, or the passing storm or sunshine of the soul and thus enables the Metaphysician to witness and trace out the visible and the invisible in one important branch of his researches into the Philosophy of the human mind”.

Now, it’s obvious that Dr. Diamond was far off the mark, as were the “Geometrical Psychologists,” but I can’t help but be drawn to these images.  Who were these women?  What was their story?  How many of them entered the asylum already mentally ill and how many became ill from the asylum?  For we know that the history of psychiatry has many dark chapters, especially as regards its treatment of women.  Some of the reasons for institutionalizing women in the past—aside from genuine mental illnesses—included adultery, promiscuity, alcoholism, disobeying husbands, and other reasons that those of you more versed in the history might share in the comments.

The photos are unpleasant, to be sure, and perhaps that’s what drew me to them.

Over twenty years ago, I took a course in American Humanities, and in one discussion, a classmate made the proclamation that “art is beauty.”  I took exception to that statement, but could not articulate my objections at the time.  Now I can: Art is not beauty; art is truth.  Any ugliness in art is the truth’s fault, and should not be blamed on the art nor the artist.

And despite the sadness, I think these people are beautiful.