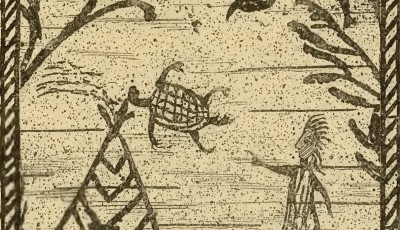 Mona patrolled the Da Vinci exhibition daily, smart and authoritative in her black security uniform.  She’d worked at the gallery five years and thought she’d seen beauty in all its forms.  Sunsets, dawns, kisses, oceans, dreams, goddesses—everything.  But nothing prepared her for The Baptist.

On the exhibition’s opening day, Mona strode purposefully through the artistic maze.  Rounding a corner, she saw only his right hand first, as a clutch of schoolgirls stood before him.  He pointed upwards to the firmament, toward God and eternity.  As the school group moved, Mona’s eyes met those of St. John the Baptist, head turned toward her, chest bare, hair a cascade of brown ringlets, smile more beatific than that of Mona’s famous namesake.

Her feet put down roots into the carpet and concrete.  Her jaw slackened.  Her chest swelled, catching a gasp in her throat, waiting there to be exhaled against the lips that smiled down upon her.

He was perfection in masculine form.

Her cheeks flushed as she remembered this was Christ’s cousin, Christ’s own baptist, a saint.  A saint made fleshly and sensual by a genius four centuries before.  Mona’s blood scintillated, inflating her breasts and other, more un-saintly, places.

She forced herself to walk away from him.  And then spent all day finding excuses to return.

The following morning brought the first note slipped into her locker.  “Baptist.  Five.”  She blushed to think of anyone having witnessed the effect the painting had had on her and, worse still, wanting to meet her there to witness it again.  She dismissed it as silly and forgot about it most of the day, until she made her closing rounds, finding herself before him again as she realised the time.

She looked around.  Nobody.  She checked her watch.  Five, exactly.  Nobody.  Just the sensual smile, the strong pointing hand, the inviting expression.

Next day, the same.  The note, nobody at five.  The next day, a repeat and the day after also.  Mona began to worry if she should inform her superiors about the obvious prank.  But every evening, with the crowds gone, Mona found herself alone with Christ’s cousin, gazing wantonly into his dark eyes, almost allowing herself to believe he was sending the notes; after all, wasn’t he the one who met her each evening?  She dreamt of lacing her fingers with his, kissing his gentle mouth, burying her face in the soft ringlets of his hair.

With the exhibition about to close, Mona stood before him one last time, the gallery quiet and empty, The Baptist inviting her to step closer.

‘I’ll miss you, ‘ Mona murmured, hand rising with a wish to caress the glass that separated them.

In the control room, a postcard of The Baptist taped to the console before him, a young guard sighed as he watched Mona on the close-circuit television.  He’d studied her every day as she obeyed his summonings.  He’d filled a sketch book with her rapt expression, her enamoured body, her loving gaze.  She was perfection in feminine form.

—From Melbourne, Australia, Welton B. Marsland’s stories, poetry, interviews & comments have appeared in many local and international markets. Currently, WBM is putting the finishing touches to a queer historical novel and attempting to bring some punk attitude to the pastime of gardening. You can find WBM on Twitter @wbmarsland.