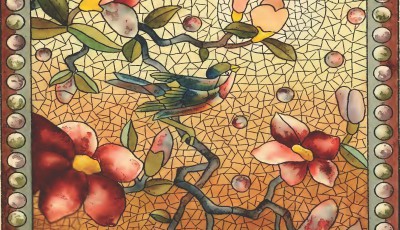 The best quilt the Faheys had, Tommy shivered under, on the couch in the brownstone’s living room, where he took too long to die—of “brutal kidneys,” they said.

I can still see him, clutching the bird-bedizened quilt to his hoarse, veiny throat with bony, curved fingers, his yellow teeth, beneath ghostly gray eyes, chattering and snapping at its fuzzy tassels like a fish at worms.

Where had it gone, now that Tommy was lying in the shiny wooden box, half hidden from my craning neck, my prying eyes, my troubled mind—suspended, trapped, perhaps like the coverlet, in some liminal state between life and death?

“Truth be towl,” as they say, the Irish, ’bout “wan tin’ or other”—truth be towl, Tee—as they called ’m—the same, who’d shaken off his earthly load and gone to seek the Great Perhaps among the insensible shades, Tee, “’tis true so ’tis,” appeared no worse for its truancy—as snug he was, aside the painful truth, as a tight-fitting tea cozy— “’idin’ oyt in plain sight,” as they say, his sole companion a gory-beaked raven miming a gurgling croak.

Long after he was lowered into the clay, my mind chased the throw’s whereabouts; and, too, why Tee in the polished case’d been “al’ turned oyt” like his older brother Mikey— on Sunday mornings, “oi’m meanin’,” when usherin’ at the ’leven o’clock mass, a tad unsteady, mind yer—“an’ who wouldn’t be, after al’, bein’ as yer man wus up al’ noight gamblin’ an’ gambolin,’” as they say, down at the waterfront’s Log Cabin?

And too, before “al’ av dat,” before the internment, at the height of the wake it was— the Fahey version of “sitting about on divans in pigtails smoking opium and seeing visions”— I wondered why Tee hadn’t just popped up for a bite from the table, which was so delicately parked, near the foot of the box, yer nu, so that, after paying respects, a mourner could, if so inclined, glide seamlessly to the kickshaws, perhaps to top off a slapdash signum crucis with cold cuts and Kaiser rolls and drinks that proudly featured two whiskeys—Three Feathers and Four Roses—and two kegs, Ballantine and Sheaffer, the latter I am sure at the behest of Mikey, a devoted Brooklyn Dodger fan.

Not to be outdone, mind yer, the other brother, Johnny it was, and his inamorata, Marie, yes Johnnie’s Marie it was—well, they naturally, he and she, brought—y’know, naturally, out of loyalty to their beloved Giants—Knickerbocker, with which they did, they did, roundly toast the deceased before roaming the room, their heads wreathed, they were, in a miasma of smoke, Chesterfield it was, relentlessly goading the assemblage of blotchy Hibernians to “’av a Kneck.” Imagine—a thing like that!

Father Gilhooly was it?

No matter, Father something or other naturally hushed the disputants with an emphatic call for the “’oly rosary.”

All eyes naturally fixed on the shiny gold crucifix, naturally—the one with the two red nails piercing the palms of Jesus, that hung on the white silk lining inside the box lid just over Tee’s inflated chest; the very icon that escaped the other’s fate, coming, as it did, to worldly repose inside the China cabinet beside the Faheys’ sacrosanct Spode dinnerware. And there at length, wouldn’t yer nu, it remained, “a ‘auntin’ reminder av death in de midst av life”—as if anyone needed reminding—undisturbed, save, of course, for the occasional clatter and clang of the aforementioned “rayle plates for speshal occasions,” on which thereafter, and to the consternation and chagrin of all, I myself preferred paper plates.

Years later it was, at a flea market in Secaucus, that I came across the aforementioned memento mori, or a rusty doppelgänger—for “two dollars or best offer.” It made me shiver, it did, not with cold, but with—well, Montesquieu’s “little shivers of loneliness which come over uneasy and troubled hearts…”

I didn’t buy it, but I would have, had it been my blankie, my bird blankie, my unreturned offering. Naturally.

—Vincent Barry’s affection for creative writing is rooted in the theatre. More years ago than he prefers to remember, his one-act plays caught the attention of the late Arthur Ballet at the University of Minnesota’s Office for Advanced Drama Research and Wynn Handman at New York’s American Place Theatre. Some productions followed, as well as a residency at The Edward Albee Foundation on Long Island. Meanwhile, Barry was teaching philosophy at Bakersfield College in California and authoring philosophy textbooks. Now retired from teaching, Barry has returned to his first love, fiction. His inaugural short story appeared in 2014. Since then Barry has published literary short fiction widely in the US and abroad. Sometimes, as in the presented work— or the title “A Lot Like Limbo” (Crack the Spine, Spring 2015, print anthology)— his lyrical tone harkens back to his heritage as a first generation Irish American. The moods of his stories range from the intense and paranoiac “When It First Came Out” (The Write Room, Fall 2014) to the poignant and heart-breaking “Biker Girl” (Corvus Review, Spring/Summer 2016). Family, marriage, communication, betrayal, and emotional isolation, all recur as themes in Barry stories. At present Barry lives with his wife and daughter in Santa Barbara, California, where, since the presidential election, he remains stuck in the first stage of grief.