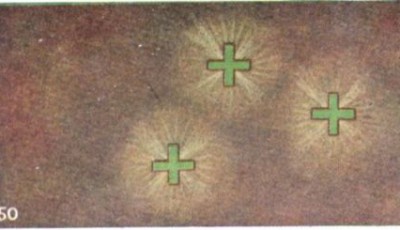 The child and the mother lay asleep inside. The man had left them there and gone to sit under the palm frond roof and stare out into the heat.

When he looked at the child, he saw nothing irregular. A shut eyed, pink little thing, just like the rest of them. His doubts fed off this ordinary appearance; he would study the child while the mother slept, desperately looking for a sign, a deformity, a peculiar expression of the mouth. But there was nothing to set him apart, nothing out of this world. He could belong to anyone.

Presently the man’s visitor, sitting in the chair to his left, said, “He’s not yours. You and I both know it.”

The man stared through the hot air at the mass of swaying leaves in the distance.

“Look at me,” said the visitor.

The man turned his face to him. He was thin, dressed poorly, his beard short and his arms dark and strong. He looked like a traveler.

And indeed, he said, “I’m a traveler. I was passing through your hometown all those months ago, when I saw her. She stood in the doorway, looking straight into my face with those brave childish eyes of hers. I came closer. I asked her for water, even though I wasn’t thirsty.”

“You know what then. He’s not your son.”

“And then I left. I go from town to town, from land to land. I have no name and I leave no tracks. I didn’t say much to her and she didn’t speak a word to me. It was a hot day.”

The visitor’s eyes pointed straight ahead. “Today is hot too. Maybe he cried and you took him to the river to cool off, to feel the water on his little feet. Maybe he slipped. Maybe you dropped him.”

“You’ll be raising another man’s son if you don’t. The son of a nameless drifter.”

The man closed his eyes and leaned back in his chair. The heat danced on his face. He could feel it running down his forehead, pumping under his eyebrows and in his beard. He breathed in, very slowly. He opened his eyes.

The visitor had changed. He was old and white haired, his skin shriveled like wet cloth. He had a long beard, and a heavy gold ring on each finger. He sat in the chair in a relaxed position, his head tilted back, a shadow of a smile on one of his cheeks. He looked around as a man who knew his own worth. The man knew it too. He remembered the face of the new visitor, a merchant from Bethlehem. He was rich. He could have offered her things—jewelry, garments, gold—in exchange for her services.

A sound came from inside the house, the rustle of her movement. The man turned in his seat, but could see only the edge of the bed through the doorway. He turned back to the silent visitor.

No, he couldn’t have bought her like that. That look of quiet, innocent madness on her face made it impossible. She never cared for jewelry or garments or gold. She cared only for the strange thoughts that kept her company, for the sight of a big, unusually colored leaf, for rocks shaped like faces, or the sky when it grew blood red late at night. And she cared for the child. She looked at him with the same eyes she had when looking on the swarm of black butterflies that filled the house that day two months ago; with the same expression of love and wonder. He was the only human being she didn’t look through as she would look through a window, the only human inhabitant of her private world.

The old merchant spoke at last. “But how well do you really know her?”

And for the next few minutes he was alone. But the calm didn’t last, and he felt the doubt rise up in him again like nausea. Someone said his name.

The new visitor was beautiful. He was tall and dark, dressed in clean white clothes. A lone ring shone red on his right index finger. Under the black of his eyebrows hid two gleaming eyes—irises the color of wine, and the rest blindingly white. Thin lips smiled from the midst of a thick and lustrous beard.

Next to this visitor, the man felt himself at once an old man and a child. A wave of shame washed over him for his dirty hands, his modest build, the coarse features of his face.

“She couldn’t resist me,” said the visitor. “He’s my son, and he’ll grow up to be like me. You’ll be an imp compared to him, and everyone will know. You’ll regret not doing it when you had the chance.”

For a heartbeat everything stood still. Somewhere, far behind, a bird flapped its wings. Another one called in the distance. He sighed. The leaves resumed their swaying.

He stood up and headed inside, leaving the visitor behind. It wasn’t this easy to get rid of him–he would keep coming back for as long as the man lived, staring at him from dark corners in the night, waiting for him by his workbench each morning. But he was better than the one who would come if he gave in and got rid of the child. These little doubts were no match for the monster who would bare its teeth at him each time he opened his eyes, repeating, in the voice of a madly beating heart, “You’ve killed the son of God.”

He approached the crib. The child didn’t look any different from how a child should be. He reached inside and placed his fingers on the pink belly. The child moved; he started and withdrew his hand.

The mother lay on her back, her lips dry but the inside of her open mouth red and wet. Her eyes circled under her eyelids. Her left hand twitched, the pinky and ring finger bending toward the thumb.

She never had any visitors.

—Louis Rakovich writes sometimes-fantastical literary fiction. His short stories have appeared in Bartleby Snopes, The Fiction Desk, Criminal Element and other publications. He’s inspired by authors such as Truman Capote, Gabriel Garcia Marquez and Edgar Allan Poe, and filmmakers such as David Lynch and Andrei Tarkovsky. He grew up in Jerusalem, and now divides his time between New York City and Tel Aviv while working on multiple writing projects, including his first novel—a psychological thriller. You can find more fiction by him at www.louisrakovich.com.